Lullabies whose beauty and maturity will also delight adults

Younger guests are very welcome to bring their favourite teddy-bears.

Natalia Kukulska is one of the most popular and accomplished Polish singers, with an immense creative output. She has also worked as a producer, co-composer and lyricist. In her adult career (she was also a child singer), she has recorded nine albums, most of which went gold, platinum or multi-platinum. She has a number of awards to her name, and a staggering 11 nominations for the most important annual Polish music awards: the Fryderyks. Kukulska’s most recent album, Halo tu Ziemia, was another bold step on a musical path that doesn’t always mirror the mainstream – a path that has won her the acclaim of both the music industry and audiences nationwide.
She is not afraid of new challenges: she was a coach on the seventh season of “The Voice of Poland”, she has starred in musicals (e.g. Miss Saigon) and her songs have featured on the soundtracks of a number of Polish romantic comedies. She also sang in the Polish versions of the animated films Hercules, The Magic Sword, Trefliki and Moomins and the Winter Wonderland.

Marek Napiórkowski is an eminent Polish guitarist and composer. From the outset of his career, he has always featured at the top of the Polish rankings, and since 2012 he has an unbroken record of being voted Jazz Guitarist of the Year by Jazz Forum readers. Acclaimed by both the music industry and critics alike, he has received ten nominations for the prestigious Fryderyk award for Jazz Musician of the Year and Jazz Album of the Year. In 2018, he won the Mateusze Trójki award for his album WAW-NYC. He has recorded more than 150 records with many different artists, as well as albums released under his own name which merit particular attention: Szukaj w snach (2018), WAW-NYC (2017), Sextet – Trójka Live (2016), Celuloid (2015), UP! (2013), KonKubiNap (2011), Wolno (2007, certified gold) and Nap (2005). Napiórkiewicz has recorded with such artists as Chris Potter, Clarence Penn, Grégoire Maret, Mino Cinelu, Manuel Valera, Anna Maria Jopek, Leszek Możdżer and Adam Pierończyk, among others. His music has been used in theatre productions put on by Adam Sajnuk and Lena Frankiewicz, and in 2018 he made his debut as a film score composer (Love and Empty Words by Małgorzata Imielska). He has played in Japan, the U.S., Mexico, Brazil, Canada, Indonesia, China, Russia, and most of Europe.

Włodzimierz Wysocki is a lawyer by profession and a lyricist at heart. He lives in Lublin, where he also occasionally writes lyrics which have been used by Jan Kondrak and the Lublin Bard Federation, among others.

Surprise. That’s one of art’s greatest values. Natalia Kukulska and Marek Napiórkowski are following in the footsteps of such giants as Miles Davies, Pat Metheny or Sting, who continue to astonish audiences with each subsequent incarnation.
In the darkness that seems to envelop all around us these days, we reach for the light. And sometimes we turn to music for comfort. We want to hear a voice that will fill us with hope. Among the tumult, excess and overload – we crave silence. We like wide open spaces, where even sounds have space and do not get in each other’s way. In dangerous times, music ought to offer support. In times of change – it should offer the illusion of permanence, and in times of disquiet – a sense of safety. Is that not what we want for our children? And not just ours, as we’re reminded in “Kołysanka dla obcych” (A Lullaby for Strangers)? We do have to remember that this is a children’s album, but as someone once said: “You must write for children the same way you write for adults, only better”.
This is a soothing album, maybe even a healing one. Let’s hope it also helps those who need it to get to sleep. And that it makes others think.
– Marcin Kydryński

Szukaj w snach is not a children’s album. It is for kids too, perhaps most of all, but – in line with the best musical traditions – this is a family record aimed at audiences of all ages. The ability to compose such music is a tremendous skill. These are lullabies for a new time and a new world.
– Daniel Wyszogrodzki, Jazz Forum

By being exposed to ‘non-infantile’ lullabies, children get a taste for art.
– Maria Brzezińska, Gazeta w Lublinie

All songs are taken from the Szukaj w snach (Search in your dreams) theatre production, which premiered on 23 September 2017 at the Stary Theatre in Lublin. 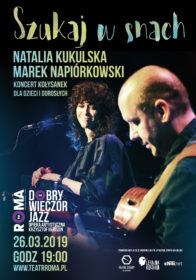