Stacey Kent is in a class of her own when it comes to jazz singing. Signed to the Blue Note label, she has won a number of prestigious awards (even being nominated for a Grammy).
Kent was born in the United States, but her music career began in England, where she met saxophonist Jim Tomlinson, who went on to become her partner in both life and music. When her first solo album, Close Your Eyes, was released in 1997, critics hailed it as the birth of a new jazz star endowed with a pure, captivating voice. They praised her immaculate phrasing and unique aesthetics that combined sensitivity and sophistication.
Her covers of Great American Songbook standards and songs from her Brazilian repertoire, including Duke Ellington, Cole Porter and Antonio Carlos Jobim classics, all feature her trademark contemporary sound.

Stacey Kent consolidated her position as one of the brightest jazz stars of the new century when she was named best jazz singer at the 2001 British Jazz Awards and the 2002 BBC Jazz Awards. Even greater success came in autumn 2007, with the release of her sixth album, Breakfast on the Morning Tram (her first on the legendary Blue Note label), which instantly sold 300,000 copies. The album broke sales records in France: 150,000 CDs sold is one of the best results ever achieved by a jazz record in that country. Kent went on a triumphant tour, and in spring 2009, she received the Ordre des Arts et des Lettres, a national order awarded by the French Minister of Culture.
The first signs of her francophone inclinations were already visible on Breakfast on the Morning Tram, which included several songs from her French repertoire – “Samba Saravah” and two Serge Gainsbourg covers. On the album Raconte-moi…, Kent returned to the French classics, revisiting songs by Barbara, Paul Misraki, Henri Salvador, Georges Moustaki and Benjamin Biolay.
“She has the style of the greats, like Billie Holiday and Ella Fitzgerald. And she sings the words like Nat King Cole – clean, clear and almost conversational with perfect phrasing,” said the late Jay Livingston, three-time Oscar-winning songwriter, about Kent.
“When you listen to Stacey Kent, you get the impression that she’s singing just for you,” critics have enthused, underlining the unique bond that emerges between the artist and her audience at live shows.

All of Stacey Kent’s albums have gained best-seller status and won prestigious awards (e.g. BBC Jazz Awards, British Jazz Award).
The singer’s most recent record, I Know I Dream, is a selection of 12 stunning pieces. Apart from the well-known standards, we will also hear a number of brand-new songs composed by Jim Tomlinson and performed by Stacey Kent with the accompaniment of a symphonic orchestra. 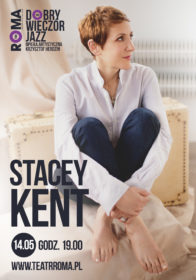